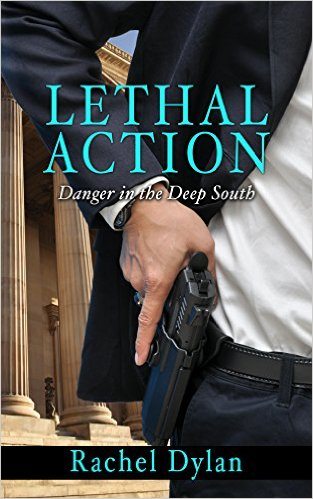 Lethal Action by Rachel Dylan is the first book in the Danger in the Deep South series.

Hope Finch is an overcomer. It’s just what she does. Climbing her way up to a successful career in law, she’s made it to second chair in a prominent corporate trial. The problem lies in her client and his involvement. What seems to be a simple breach of contract, has become a fight for her life.

Gabe Marino is a FBI agent who cares deeply about his hometown. So much so, that he’s willing to fight off whatever powers may be in order to keep it safe. Leary of Hope, he prays she’s not part of the conspiracy. Unsure, he’s not taking chances.

This is the first of Rachel Dylan’s books that I’ve read. I found Lethal Action to be a clean legal thriller with a touch of romance. I especially loved Gabe’s character because of his strength and faith. I look forward to reading more of her books and received this copy from the author in exchange for my honest opinion which I’ve provided here.

Find out when my next book releases and stay up to date with other writing news.